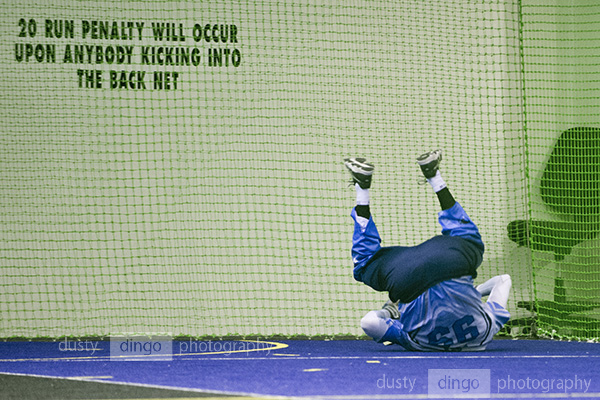 THE OVAL - The Court, the Net, the Grass, the Ball, the Umpire

Many, many moons ago when I first heard of Indoor Cricket, I imagined a very large indoor area, with fielders scattered around as in 'normal' cricket, and the same hard, dangerous red ball flying about. It seemed a silly and risk-ridden idea ..... the ball would ricochet off walls and ceilings and fielding would be a very dangerous and difficult task. But curiosity got the better of me, and I went to have a look. Much to my relief, my original vision was way off the mark.

Indoor cricket is played on a rectangular court, fully enclosed in tight, strong netting (including the ceiling). The pitch length (wicket to wicket) is the same as a 'normal' cricket pitch, and all markings at both wickets are based on usual cricket dimensions. The only significant difference is the  distance the batsmen have to run - the crease at the non-strikers' end is one-half the way to the non-strikers' stumps. Consequently, at the end of each over, the batsmen change ends - the bowlers always bowl from the same end (I have prepared a diagram of the markings on an Indoor-Cricket court, plus some plain-English explanations of the main features). There is also a section describing and explaining the enclosing netting.

So, how do you get the grass to grow indoors?

Therefore, the game is played on fitted carpet, similar to the synthetic pitches sometimes used in outdoor venues. As you will notice in some of my photos, the actual pitch is a different coloured carpet to the rest of the field, but mostly it is of the exact same material as the rest of the court.

You're not getting me in there with that hard little red ball!

However, the ball is a modified cricket ball - a softer centre makes it lighter than the traditional red ball - and it's yellow!! Otherwise it is traditional in design, including the bowler's delight, a six-stitched seam. It is leather, two-piece, the same size as a traditional cricket ball, and when new is still very hard, though without the red ball's weight. An indoor ball swings much more than a red ball, and takes spin and seam to a greater degree also (especially when brand new).

And it still flies off the bat when struck well.

To round the picture off, we should probably mention the umpire.

In a game, there is usually only one umpire. The umpire is also the scorer and scoreboard attendant (entering the ball-by-ball score and running total on a score-sheet, and on an electronic scoreboard by means of a numeric keypad). He or she sits (some misguided souls actually stand, thereby exaggerating the already inherent disadvantage of being situated high above the play - but that's another story) on an elevated platform directly behind the striker's stumps, as can be clearly seen in the photo to the right. As with players, umpires' abilities vary greatly. However, unlike players, umpires are always right, according to the score-sheets anyway. . . . . . 'nuff said I think.  We have a closer look at umpires in the Umpiring section, including the good oil on how to become a truly great umpire.