The secret to being a successful indoor cricket bowler? No, it's not Testosterone . . .

Despite all the hype, the main aim of a good indoor cricket bowler is not knocking the batsman's head off or breaking his / her ribs. It's actually a little more nuanced than that . . .although it should be noted, what makes a "good ball" against one batsman doesn't mean it's going to be the best choice against another.

The basic strategy when bowling is to prevent the batswoman from scoring. Failing that, it is to stop her from scoring 2's. Of course, if you're defending a very low score, the main aim becomes the taking of wickets, but restricting scoring is the back-up even then.
Generally speaking, the bowler should always be trying to force the batswoman to play the sort of shot which will increase the chances of her being run out - run-outs are by far the most common form of dismissal in indoor cricket. Catches are the next most common. Clean-bowled is the least common (well, LBW is really the least common, but you know what I mean).Coincidentally, the ball that is most likely to result in a run-out is also the type of ball from which it is harder to score. 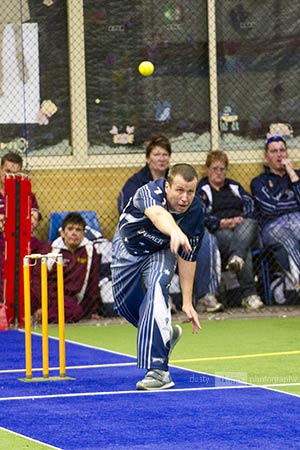 To prevent the batswoman from scoring, or from scoring 2's, the bowler should be bowling within that old maxim, "line and length", although it's slightly different from outdoor cricket. The line (direction of the delivery) and length should be such that the batswoman doesn't have the room to play the standard "down and up" shot so successful in indoor cricket (see above). The better bowlers try to at least hit the batswoman on the leading leg, at or a little above knee-height. This makes it almost impossible to play down and up to the off side, and very difficult and risky to try to play the same shot to the on side. It also make the ball very difficult to drive firmly. Quicker bowlers, or those who move the ball off the pitch, would be aiming to hit the batswoman's leading leg a bit higher, more around the hip, or, if they can get a bit of kick off the pitch, up above the hip around the lower ribs.

The result of such a ball is very often a ball played not too firmly to one of the in-close fielders. This in turn greatly increases the chances of a run-out, either as a result of the fielder tapping the ball straight back to the wicketkeeper, or taking it and throwing to the other end (remember, most batswomen will run whenever there is contact with the ball, so the chance of run-outs in this fashion can come around very frequently - if the bowler is doing the right thing).

The most common mistaken belief about bowling in indoor cricket, especially from Testosterone-soaked young males, is that faster is better. Well, if you are genuinely quick (and that means very, very, very quick), your pace alone can be enough to get you results. But for 99.999% of those who play, line and length are paramount.

Bowlers of spin, leg-spin in particular, will sometimes bowl a different line to the above, especially if they believe they can get a particular batswoman out stumped or caught. But they too are generally best served by trying to hit the batswoman on or around the knee of the leading leg.

BACK TO "STRATEGY" INDEX - - - ON TO FIELDING STRATEGY